Archery in the South of Bedfordshire 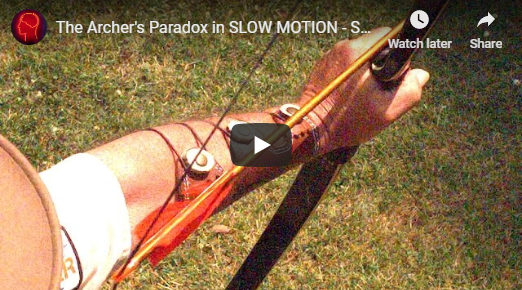 This is a must-watch video, super entertaining.

Paradox means that two or more things that can never be true at the same time, suddenly are true at the same time.
So a paradox contradicts itself and defies any logic.
When you look at the bow and arrow and give it some thought, you notice that it should be impossible to hit any target with an arrow.
The arrow should not be able to pass the riser (grip) of the bow and hit the target behind it. The arow should deflect off the riser and fly to the right or the left.
Here is a picture to illustrate what I am talking about:
A is the riser. B the target and C the point where the arrow should fly.

How Is It Possible To Hit The Target?

It’s a paradox that you can hit your target with a bow and arrow, but still, you can do it.
People have been doing it for thousands of years.
But how? The arrow can not go through the riser of the bow.
It has to pass by it, but somehow it works its way around the riser and continues flying toward the target.
Let’s have a look at an arrow flight in slow motion:

The Halloween targets were out last night! Always seem to do better when it's a fun shoot though ;-) ...

Calling all Pepperstock Winners: if you have trophies, we need them back in preparation for the AGM. If you're attending Houghton tomorrow evening, please take them with you and hand them to either Chris or me.

Also, don't forget it's Recurve Postal so please put in a score.

Any cookies that may not be particularly necessary for the website to function and is used specifically to collect user personal data via analytics, ads, other embedded contents are termed as non-necessary cookies. It is mandatory to procure user consent prior to running these cookies on your website.